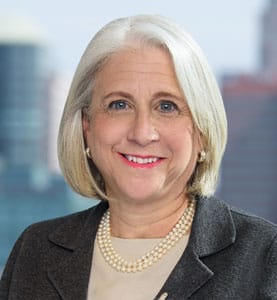 “Some of life’s greatest challenges are going through a divorce, custody battle or assuming guardianship of a loved one. I am here to guide you through this process so that you can rebuild your life from a better place.”

Barbara Greene, a partner at SBWD Law, joined the firm in 2013. Barbara concentrates in family law matters, specifically, divorce and child custody, adoptions and guardianships. Barbara makes a special effort to explain legal issues clearly and simply, and to communicate with clients so that he or she understands their options at each stage of a proceeding. Barbara prides herself on the fact that her settlement agreements are written in “plain English,” so that each party can understand what is expected of them and what they can expect from the other party. Barbara’s practice and diverse legal background has taken her into courtrooms in almost every county in Maryland.

Barbara’s legal career began in 1981 at Westinghouse, now known as Northrop Grumman, concentrating in government contracts law, copyright and trade secret matters. Upon moving to Boston in 1987, Barbara worked for the Massachusetts Institute of Technology, where she continued to focus on copyright and trade secret issues (now known as “intellectual property law”) by negotiating technology licensing agreements with research sponsors. Barbara then joined a start-up software company as its first in house intellectual property counsel and later opened her own practice in Massachusetts, concentrating on software licensing and technology transfers for engineering and software companies. When Barbara returned to Maryland in 2001, she wanted to expand her courtroom experience, and changed the focus of her practice to family law matters and criminal defense. Since joining SBWD Law, she now concentrates solely on divorce, custody, adoptions and guardianships, assisting people at some of the most vulnerable times of their lives.