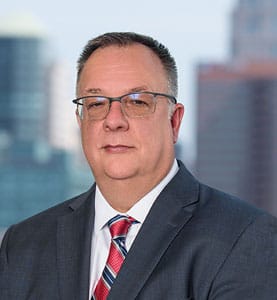 “After a successful career as a Maryland State Trooper, I felt it important to continue to support law enforcement. I am extremely proud to defend law enforcement officers in administrative and criminal proceedings to ensure their rights and jobs are being protected.”

Michael “Mike” Davey, a partner at SBWD Law, joined the firm after a twenty year career with the Maryland State Police. He primarily focuses on serving law enforcement officers across Maryland in areas such as police misconduct and pension law. Mr. Davey has represented more than three hundred officers in police-involved shooting cases throughout the state. A retired Maryland State Police Captain, Mike served in the agency’s Field Operations Bureau, Drug Enforcement Division, Criminal Investigation Division, Communications Division and Human Resources Division. He was also named the agency’s permanent chairperson for administrative disciplinary hearing boards, which has been advantageous in defending law enforcement officers accused of misconduct. Mike also represents law enforcement officers who are seeking disability pension benefits for injuries which have occurred during the line of duty. Mike’s background in law enforcement provides him not only with valuable, hands-on experience, but also a unique ability to understand and sympathize with his clients’ needs.

In 2015, Mike was instrumental in the defense of six police officers in the death of Freddie Gray.

When not working, Mike enjoys Ravens games, the beach, and spending time with his family.