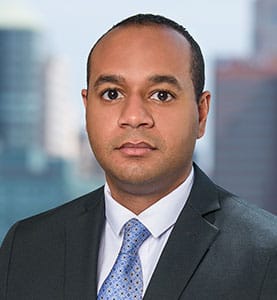 “I understand the stakes.  I understand what your case means to your life, your freedom, and your continued employment. No one is ever going to care about your case quite as much as you do.  But I’m going to come in a close second.”

Chaz R. Ball, a partner at Schlachman, Belsky, Weiner & Davey, P.A., joined the firm in 2012.  Chaz employs his extensive background in criminal law, administrative law, and civil litigation to handle complex litigation in both State and Federal Courts. In addition to handling personal injury, civil rights, and criminal matters, his practice also includes appeals, juvenile matters, and peace and protective order proceedings. Recently recognized for the tenth straight year as a Super Lawyers Rising Star, Chaz has tried over one hundred-twenty bench trials and over sixty jury trials to verdict, and argued before Maryland’s Court of Special Appeals, and Maryland’s highest court, the Court of Appeals. Chaz’s work ethic and trial skill is well respected in the community by other practitioners and members of the State and Federal bench.

Chaz received his undergraduate education at the University of Maryland at College Park as a Banneker Key Scholar, where he graduated with Dual Degrees in Government and Politics and African American Studies.  As an undergrad, Chaz engaged in activities that provided a strong foundation for his analytical and trial skills, competing as part of the University of Maryland Mock Trial Team, serving as Second Vice President for the NAACP, serving as a representative on the Dean’s Student Advisory Council, and acting as a Community Advocate for University Student Judiciary.  Chaz was also a contributing writer to various campus publications, honing his writing skills that he continues to utilize in his practice today. Following his undergraduate education, Chaz earned his law degree from the Sandra Day O’Connor College of Law at Arizona State University. As a law student, Chaz continued his involvement in activities to strengthen his trial skills. He coached the Arizona State University Undergraduate Mock Trial Team, competed in various internal and external mock trial and moot court competitions, served as a Research Assistant, served as President for the Black Law Student Association, and prosecuted misdemeanor bench and jury trials as a student attorney with the Scottsdale Prosecutor’s Office. The strengths that Chaz developed in his education continue to assist him in analyzing the diverse range of cases in his practice today.

In addition to his law practice, Chaz has served as an Adjunct Professor at Towson University in the Department of Mass Communication and Communication Studies. Chaz has also served on and participated in multiple publications and committees, notably as a member of the Editorial Board for the Trial Reporter publication of the Maryland Associate for Justice, Young Lawyers’ Division Public Education Chair, Member-at-Large, and Nominating Committee member for the Bar Association of Baltimore City, as a Member-at Large and Tech Committee Co-Chair for the Monumental Bar Association, as an Associate Editor for the American Bar Association’s The Young Lawyer publication, and as an Assistant Editor for the Maryland State Bar Associations The Advocate.  In 2020, Chaz was appointed by Governor Larry Hogan to serve on the Judicial Nominating Commission for District 14 in Baltimore City. Chaz was also appointed that same year to serve as an attorney member of Maryland’s Commission on Judicial Disabilities.